Why Deer Park Landscape Lighting is For You

If you don't already have Deer Park landscape lighting, you may be missing out on an opportunity for the greatest safety, beauty, and functionality of your home. This is one of the most gorgeous communities in all of the North Shore, with seemingly endless grassy meadows, beautiful little ponds and lakes, and majestic homes nestled on huge lots with mature trees.

However, this is a community that can be attractive to thieves and pesky wildlife. You can't overlook the benefits of landscape lighting to get the most from your property and prevent unwanted guests.

Here's what you need to know about why Deer Park landscape lighting is a good decision for your family. 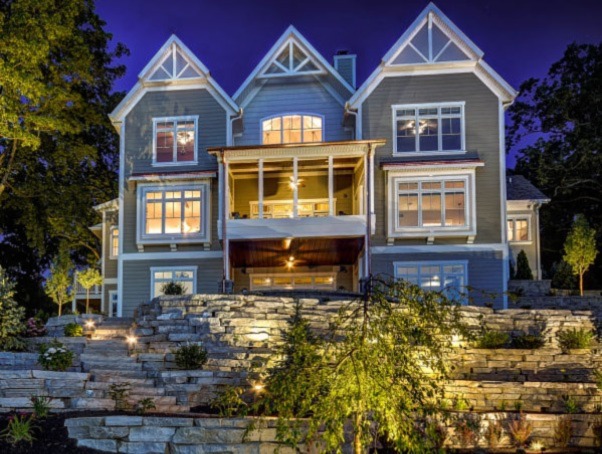 The aptly-named Deer Park is one of the very few places in all of the Chicago suburbs where you really might see a deer. This village borders a number of natural areas, including the Cuba Marsh Forest Preserve, Deer Grove Forest Preserve, and Deer Grove East.

The natural feel of the bordering wilderness areas is brought into Deer Park itself, with extremely large lots and huge grassy park-like spaces built into the majority of the neighborhoods. Deer Park is bordered on the north by Lake Zurich, to the east by Kildeer, and to the south by the green belt of forest preserves. To the West is Barrington. Chicago is a brief hour's drive, making the natural feel of Deer Park all the more surprising.

As of 2020, the population of Deer Park was only 3,681. It has the ZIP code 60010 and belongs to the Lake and Cook Counties and Ela, Cuba, and Palatine Townships. Deer Park is almost entirely residential, but it does have some very popular destinations for dining and shopping.

The Town Center Promenade and Park Town Center are both favorite spots for a day out on the town for residents of Deer Park and neighboring areas as well. Deer Park is also home to the Charming Vehe Farm, a centennial farm perfectly in line with the highly natural feel of Deer Park.

Nearly all of the restaurants in the area are on Rand Road. Beelow’s Steakhouse is a local favorite casual American restaurant with seafood, steak, and a full bar. They serve a brunch with prime rib, omelets, waffles, eggs benedict, and more that is particularly popular. The Sake Sushi and Grill is a casual Japanese restaurant with all you can eat sushi specials.

Deer Park was incorporated in 1957. From the beginning, this community was established for the purpose of maintaining green space and comfortable living for its residents.

Before Europeans arrived to Deer Park, it was settled by the Pottawatomie, Macoutin, and Winnebago Native American tribes. By the 1830s, settlers from Vermont and Massachusetts had moved into the area.

A railroad from Chicago through Deer Park encouraged a population boom that was controlled by strict zoning to keep the area residential and lot sizes large. Zoning is still set at a minimum of an acre for residential properties throughout the majority of Deer Park.

Today, this community looks much like it did in the 1900s, with large, beautiful lots, plenty of community green space, and a general pushback against the congested feel of many of Chicago suburbs.

Deer Park landscape lighting is a superb way to increase the security of your home. In an affluent community like Deer Park, security is always an important consideration. It can be all too easy for a prospective thief to take a turn off of the South Northwest Highway or Rand Road and look for easy targets among the large, beautiful homes of Deer Park.

The very space and naturalistic feel that make Deer Park such a desirable place to live may also lead to significant security risks. Many of the homes in Deer Park are not easily visible from the road or a neighbor's house, which means thieves are unlikely to be detected. The large, mature trees and extensive landscaping on most of these properties also shield intruders from view.

Landscape lighting is among the most affordable and least invasive ways to increase the security of your Deer Park home. If you hate the idea of fencing in your property or taking other security measures, look into Deer Park landscape lighting.

One of the most incredible things about living in Deer Park is the fact that you might actually see a deer, along with lots of other wildlife, right in your own backyard, a mere hour’s drive from Chicago. The proximity to acres and acres of forest preserve, the many small lakes and ponds scattered throughout the community, and the huge lots, all encourage wildlife to venture out of the forest preserves and into your backyard.

When it's deer, wild turkey, songbirds, and squirrels venturing onto your property during the day or at dusk, you probably find the presence of wildlife delightful. However, when it's raccoons, possums, or even coyotes and bobcats, you likely would rather they stay off of your property.

A quality landscape lighting company can install lighting that will deter nocturnal animals that you'd rather not have around but not frighten daytime visitors you would like to see. Few wildlife deterrents simultaneously improve the look of your property and enable you to enjoy it more as landscape lighting does.

Enjoy Your Property Even More

If you're letting your backyard ball games and evening strolls end when the sun goes down, you're not making the most of your Deer Park property. Here are just a few of the many ways that landscape lighting can make your property more enjoyable for you:

Whatever you love about your Deer Park home, you'll find that you can get even more from it with the best landscape lighting for your home.

Make Your Home the Best Looking One on the Block

Deer Park residents take pride in their homes. Most neighborhoods have at least something of a friendly competition over whose home is the most beautiful. Deer Park landscape lighting can dramatically elevate the look of your home, suddenly making your property the one getting appreciative looks every evening.

Whether you're thinking about selling your home or you just want to make a strong impression, landscape lighting is the perfect solution to improve your home’s curb appeal and impress the neighbors. Excellent landscape lighting services can highlight what you love best about your property, so not only will your house look amazing, but the things you care about most will be on center stage.

Landscape lighting can bring out the best in your home in ways you may not have imagined. From making your home safer from animals and criminals to giving you more time in the day to enjoy your property, landscape lighting has a variety of benefits to offer you.

Be sure to choose a quality landscape lighting expert like American National Sprinkler and Lighting to install Deer Park landscape lighting. Handyman or general landscape crews may say they can install landscape lighting for you. However, the reality is that installing lighting that will make your home look its best and increase functionality as efficiently as possible requires a great deal of skill and experience.

We’re constantly updating our communication systems and vehicles and work seven days a week so you can have total confidence that we’ll be there when you need us. Contact us today and learn how we can transform your landscape with quality Deer Park landscape lighting.